What to do in Kuşadası?

Most people think Kuşadasi is in Izmir. However, Kuşadası is a prominent district of Aydın.

We recommend you to visit this lovely city, which is only 20 kilometers away when you come to Selçuk. You can also include the list of places we have prepared for in Kuşadası district, which dates back to the Lonian Civilization (İyon Medeniyeti) to your trip plan.

You can easily reach the places on the list with minibusses that go every 15 minutes from Selçuk.

Kuşadası is a holiday town which has a beautiful memory for travelers even though it has lost its popularity in recent years. Despite the concrete appearance, a lot of people like Kuşadası, have a lot of activity, live life, always a vibrant and crowded center. Kuşadası is a town where cruise tourism, which is the popular term of today, is very busy. It is a city where you will want to be in the middle of the sea by seeing luxury ships in the harbor. In general, Kusadasi guests visits on the day trip to the ancient city of Ephesus and the house of Virgin Mary, after coming by their luxury cruise ships, then they return to the streets of Kuşadası.

Where To Visit In Kuşadası?

Kusadasi National Park: In the Kuşadası National Park, where 209 bird species can be seen, attracts the attention of local and foreign tourists thanks to its coastal features that contain different coastal shapes.

With its lush forests and clean air, Kusadasi National Park is only 25 kilometers away from the center. With its 804 plant species and rich variety of animals, it is considered to be one of the most important natural habitats in our country. The park was also entitled to receive the Blue Flag, a prize awarded by the International Environmental Education Foundation, to beaches and marinas with certain criteria. Moreover, there are nice places to have a picnic in Kuşadası National Park.

Built-in the 17th century by Öküz Mehmet Pasha and restored in the 1960s, the caravanserai is one of the stops that have been visited by tourists. Caravanserai has not lost its glory ever since.

There are many beaches to swim in Kusadasi. Women Beach, Long Beach, Sevgi Beach, Kustur and Papaz Beach are the most popular but the beaches are not limited to these. Tusan, the Women’s Sea, Güzelçamlı, Büyük, and Küçük Kalamaki and Dipburun are among the sparkling, popular and beautiful beaches of Kuşadası. 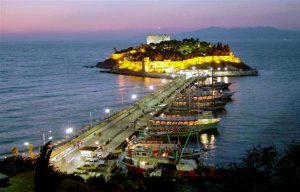 Kale is one of the destinations you should definitely see. The construction of the fortress on Güvercinada was started in the Byzantine period. In the Ottoman period, the castle was used as a defense wall against the attacks from the sea. History buffs should see this castle in the center of Kusadasi and west of the harbor. You can also visit Dilek Hill, where you can see the walls of Panionion, the skyline of 12 Ionian Cities. Zeus Cave located at the entrance of the Dilek Peninsula should not be forgotten. Besides, one of the first residential areas of Kusadasi, the ancient city of Neopolis can be added to the list.

This castle which dates back to the Byzantine period in the middle of a small island was built in 1957.

You can watch the enormous sunset while sipping your drink in the tea gardens around this island which hosted many bird species, especially pigeons in the past.

Zeus Cave known as the ‘Hidden Paradise’ of Kuşadası, is located at the entrance of the National Park. It is a natural cave formed by the water source coming out of the cave. The ancient city of Panionion is located at the top of the hill on which it is located.

Daily Boat tours from Kuşadası departs from near the Pigeon Island (Güvercin Ada) and visits the most beautiful bays around Kuşadası costs. It goes to the bays of Dilek Peninsula National Park, Özdere beaches, Claros bay, Maydanoz Koy and others.

It is the largest railway museum in Turkey and contains one of the largest steam locomotive collections in Europe.

In the museum, there are 33 steam locomotives displayed outside, half of them arrayed around an 18-road turntable. The manufacturing years of the locomotives range from 1891 to 1951. The oldest one is built by British Stephenson.

More information on Kusadasi History from the official website.